AnyHedge compares favorably to fiat-backed stablecoins in custodial risk: there is no large reserve of funds under third-party custody that can be embezzled. It also has advantage in censorship-resistance, as contracts can be formed ad-hoc on-chain, avoiding censorable creation and redemption interfaces. It is notable that incentives for malice in a centralized stablecoin grows with the value under custody, which is not a concern for AnyHedge due to its transactional nature.

The disadvantage of AnyHedge lies in user experience. Fiat-backed stablecoins offer a mostly fungible, currency-like experience, while AnyHedge necessarily requires coordination with a second party. The need for coordination can be mitigated with automated one-click interfaces and transferable contracts that mimic traditional bond markets as described below. We expect mostly businesses and sophisticated users to adopt AnyHedge, some of which may use it as a foundation to create user-friendly products and services.

While there may seem to be no explicit custodial risk associated with algorithmic stablecoins, governance and systemic risks remain. AnyHedge compares favorably in these regards due to its transactional nature: there is no central party whose compromise would affect the whole market. Similar to the case of fiat-backed stablecoins, incentives for malice also grow with size at central points of failure such as governance bodies and unified oracles. Even in the case of AnyHedge code vulnerabilities, upgrades can be seamlessly deployed for new contracts. Old contracts are also protected to a limited degree by the use of P2SH. As the exact script and parameters are not revealed during creation of the contract, a third party attacker cannot compromise funds until the script is revealed by redemption. This is described in more detail in “Attack scenarios” below.

AnyHedge faces a similar user experience disadvantage as it does with fiat-based stablecoins. It also has the same potential to displace and create new value on the back-end.

In a sense, custodial derivatives can be seen as the direct competitors of AnyHedge. The user experience is similar and so is the nature of hedging. However, while mitigations exist, custodial derivative solutions face counterparty risks that have proven time and again to be quite vulnerable, especially in the face of large market swings. AnyHedge, on the other hand, is not subject to the same risks of contracts failing to be honored. The collateral is already in place at inception and in the worst case, the contract can be easily liquidated before there is slippage. This is on top of the difference in censorability and custodial risk of funds, which custodial exchanges are inherently exposed to.

On the other hand, we expect custodial derivatives to still have an edge in matchmaking speed and liquidity. They also offer a much wider variety of products until additional non-custodial products are developed, some of which are listed below under “Different setups”. 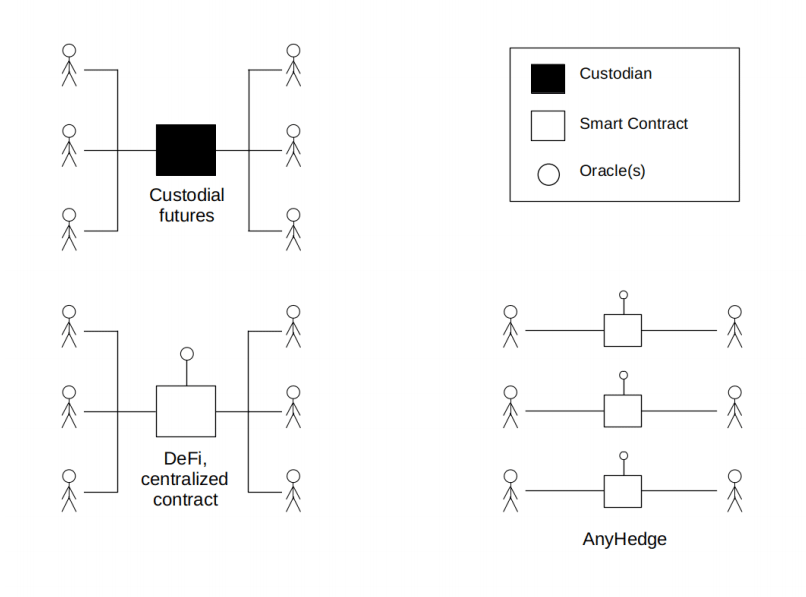 We take the reliability of our protocols very seriously, so we had a third party do a mathematical analysis of the AnyHedge protocol.